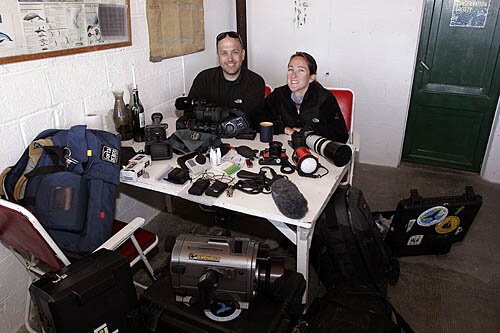 Chris and Genevieve Johnson of earthOCEAN will be speaking at Wildlife Asia - Asia's premier wildlife and environmental film festival in Singapore from March 13-16, 2007.

The Wildlife Asia is an international wildlife, conservation and environmental film festival. Wildlife Asia celebrates the very best in wildlife filmmaking in Asia and throughout the world. It is open to filmmakers, conservationists and the public.

The Festival will be an essential marketplace to: stimulate new film productions for the local and international markets; advance wildlife and conservation filmmaking throughout Asia; and nurture new Asian filmmakers. It will also be a vital platform for debate on the most pertinent topics to wildlife filmmaking and conservation communication in Asia.

The Festival itself will culminate in the Lion Awards - honouring the best wildlife and conservation films and new media productions.

At 2pm on March 14, Genevieve Johnson will be part of a panel of speakers discussing "Science versus the Story"

An issue that always provokes heated debate: Can dumbing-down go too far? In our attempts to reach broader, larger audiences have we neglected good educational story telling? How is reality television affecting our perception of what the viewers want? Panelists include:

On March 15th, at 4pm, Chris Johnson will be part of a panel entitled - "Interactive Future - Alternative forms of broadcasting"

What is the future of broadcasting? This seminal seminar attempts to forecast how convergence of the media and interactive television will affect future wildlife filmmaking and identifies key technological developments such as 3G broadcasting that are enabling us to develop new ways to communicate. Panelists include

On March 16th at 11:30am, Chris & Genevieve will take part in "Inspiring the Future" - Sponsored by WWF

In this event, we use the latest communication technology to find new ways to inspire today's youth into becoming actively involved in caring for the natural world.

Working with Apple, we will take a couple of youth filmmakers works and go through the processes of how they can shoot and broadcast their own films - directly from their MacBook Pro! This session will also draw on the experience of panellists as we explore how technology is making it possible for anyone to be a filmmaker, a broadcaster, an agent of change - thanks to mobile filmmaking and the internet. Panellists including:

Follow updates of Wildlife Asia in Chris Johnson's blog - "Behind the Camera".