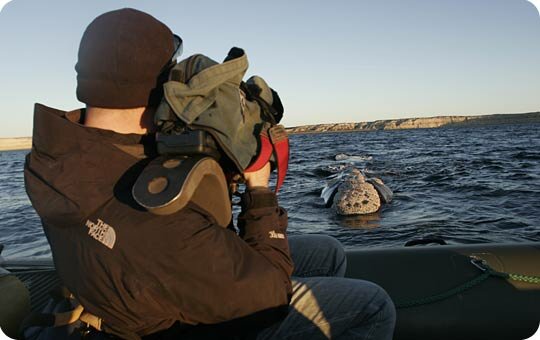 04.10.2007
"Wake of the Baiji"
We recently interviewed scientist Robert Pitman. He recently returned from China, where he participated in an international expedition, searching for the critically endangered river dolphin called 'baiji'.
View the full report.

01.01.2007
"Southern Right Whales of Argentina"
Discover more about the lives of southern right whales in Argentina. Follow the research of international scientists working to understand and protect these whales, and their marine environment.
View the full report.

04.05.2007
"Southern Elephant Seals"
Southern Elephant Seals are the largest pinnipeds (seals and sea lions) on the planet. At certain times of the year, they gather together on specific beaches to give birth, nurse and mate. Most populations are showing signs of rapid decline.
View the full report.

Sea Bubble Science May-June, 2006
A co-production between Ocean Institute , SCRIPPS Institution of Oceanography and earthOCEAN media and funded by the the National Science Foundation.
The Ocean Institute (www.ocean-institute.org) is a unique, 'hands-on' environmental education facility in Dana Point, California. In July 2006, they presented a four-month educational exhibit on the "Science of Sea Bubbles". earthOCEAN wrote, filmed and edited a 22-minute documentary in high-definition video that was presented in their main hall to the general public. This educational film focuses on the work of two oceanographers at SCRIPPS Instition of Oceanography, Drs. Grant Deane and Dale Stokes, who study the physics of sea bubbles in breaking waves both along the coast and in the open ocean and whose work was featured in the journal NATURE. They are quantifying the role that sea bubbles play in the exchange of gases between the air and sea and apply that to climate change models.

The Voyage of the Odyssey was a 5 and a half year global scientific and education expedition studying whales and the health of the world's oceans. Led by biologist, Dr. Roger Payne, who has been researching whales for over 35 years, it used multimedia, especially the internet, to 'take the world' with its scientists and researchers around the globe. During the expedition, the whale research vessel Odyssey surveyed waters from San Diego, CA USA, the Galapagos Islands, across the Pacific Ocean to Kiribati, Papua New Guinea, into the Indian Ocean, Western Australia, British Indian Ocean Territories, Seychelles, Maldives, Sri Lanka, Mauritius, the Red Sea to Turkey, Greece, Italy, Spain, Gibraltar, Canary Islands, across the Atlantic Ocean to Anguilla, Bahamas, and finally along the east coast of the United States to Boston, Massachusetts. The Voyage finished in August 2005.
Chris & Genevieve Johnson of earthOCEAN, documented the entire expedition producing over 500 field reports via satellite called 'Odyssey Logs', as well as over 50 short video documentaries. The following are a selection of videos from the Odyssey expedition.
To view video, download the FREE RealOne Player.