After 5 weeks filming right whales, we jumped at the chance to spend an afternoon with another large marine mammal known to frequent the World Heritage Site of Peninsula Valdés - the Southern elephant seal Mirounga leonina. Compared to whales that spend the majority of their lives out of sight beneath the sea surface, filming elephant seals along the beach is a breeze, and we embraced the opportunity.

The view from the cliff top at Caleta Valdés is of a carpet of what look from a distance like hundreds of giant slugs, rolling, barking, fighting and snoring on the narrow strip of sand where ocean meets land. Patricio, an Argentine guide, took Chris and I to Caleta Valdés. Tourists are generally restricted to set paths and cannot go on the beach with the animals, fortunately in Patricio's presence, we were allowed on the beach. We cautiously descended the steep sandy slope, our legs shaking under the additional weight of our camera gear, but it was well worth the climb. As soon as we were on the beach, we were immersed with the animals in their element, the shrill sounds, and pungent odors envelop us immediately. We were quickly able to identify groups divided by age class and sex. One year old 'weiners' huddled together seeking comfort, females dozed in their harems and nursed their newborn pups, harem bulls patrolled their borders, while young bulls scouted the perimeters looking for a chance to mate. Newborn pups are by far the most adorable with big round watery eyes. For this reason the dreaded sight of an abandoned or lost pup is almost unbearable, these unfortunate few are left to starve. We also noted several dead pups, apparently crushed by harem bulls, which in their urgency to patrol and defend their territory trample any animal too slow to get out of their path.

Caleta Valdés runs along the east coast of Peninsula Valdés, and juts out into the frigid waters of the Southern Atlantic Ocean. It is a haven for southern elephant seals. After months of foraging in open-ocean mainly on squid, these seals collect together on the beaches from September to November to give birth, nurse and mate. Adult males generally arrive before females in order to fight for dominance and the right to a harem of up to 100 females.

It is only when on the beach with these animals you realize how large the big bulls really are. Southern elephant seals are far larger than their northern cousins. At 16-foot long (5-meter) and weighing in at over 11,000 pounds (5,000kg), that's half a ton of seal - southern elephant seals are the largest pinnipeds in the world. Their usual sluggish behavior belies their ability for surprising bursts of speed. We watched the largest seemingly cumbersome males, charge frantically at other males. It is quite comical to watch challengers hiding in the surf, only to choose their moment and steal unnoticed onto the beach in an attempt to mate with females belonging to an established harem. Such behavior is risky and invites a frenzied charge by an infuriated bull. More often than not the challengers flee back into the surf. Occasionally a brave soul stands his ground and fights, only to be left gouged and bleeding. We marveled at the vicious nature of the natural selection process, but with a tough life ahead, any young pup would prefer to inherit the genes of only the strongest of these marvelously impressive bulls. 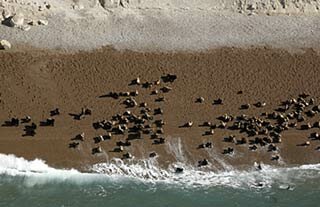 Patricio told us to keep a couple of meters distance form the seals when filming, to move relatively slowly through the group, and to watch out for the bulls. We did not need to be told twice.

We spent the next three hours among these extraordinary animals. Some appeared curious about us; others yawned and barely seemed to notice us. Up close, these seals are very distinctive. The elephant seal gets its name from the male's large inflatable, elephant like trunk.

In addition to Argentina, the Southern elephant seals primary breeding grounds are sub-Antarctic islands, with the population at South Georgia Island, containing about half of the entire population of about 600,000 animals. Other important breeding colonies are found at Macquarie, Heard and the Kerguelen Islands.

The southern elephant seal was heavily exploited in the 19th and 20th centuries for its oil. Today the species is protected by legislation in various countries within its range, and is listed as an Appendix II species under CITES (The Convention for the International Trade in Endangered Species). However, despite protection, most southern hemisphere populations are declining, some as much as 90% in the last 40 years. It appears that only this population in Argentina is growing.

The reason for the alarming decline in most populations is not yet understood, and seems specific to southern elephant seals rather than animals in the Southern Ocean as a whole. Theories range from competition with other predators and fisheries, to increased predation by killer whales due the removal of so many large whales, to ocean environmental change. Of course the cause may be a complex combination of these and other factors.

As the sun drops behind the cliff, the brilliant orange light of late afternoon vanishes abruptly and the beach that glowed only moments before is transformed into a grey, cold landscape.

It is time to head back to Puerto Piramides, clean cameras, charge batteries and prepare our equipment for filming whales tomorrow.

Zoom into the location (marked in red) of where we filmed Southern Elephants Seals on Peninsula Valdes, Argentina. 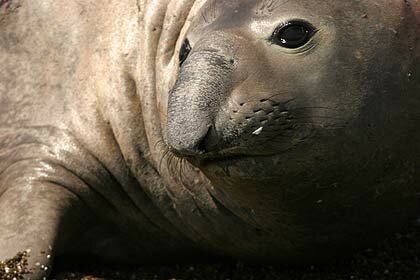 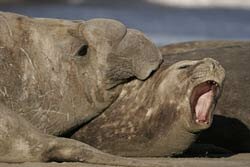 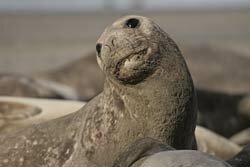