We interview author Erich Hoyt about the concept of creating MPAs for cetaceans, and their far-reaching impact in conserving other species, and whole ecosystems. http://link.brightcove.com/services/link/bcpid1412254187http://www.brightcove.com/channel.jsp?channel=717691041

Whales of the Mederranean Sea - Part 5
"Sanctuaries of the Sea - Are Marine Protected Areas for Cetaceans a Solution?"
15 minutes, 31 seconds    Adobe Flash

>> Watch a QUICKTIME Version of "Sanctuaries of the Sea"

"Sanctuaries of the Sea - Are Marine Protected Areas for Cetaceans a Solution?" is the fifth and final program of the documentary series, "Whales of the Mediterranean Sea".

What does it mean to save whales, dolphins and porpoises if their habitat is left unprotected?

Marine Protected Areas, also known as MPAs or Marine Sanctuaries, are the equivalent of national parks and protected areas on land.

Erich Hoyt is an author and senior research fellow for WDCS, the Whale and Dolphin Conservation Society. He feels that creating MPAs for cetaceans can have a far-reaching impact in conserving other species, and whole ecosystems.

Marine scientists Ana Cañadas and Ric Sagarminaga work in the Alboran Sea off the coast of southern Spain. They are identifying critical habitats for migratory species while working with various local groups whose livelihoods depend on a healthy sea.

However, can establishing MPAs protect cetaceans from all human pressures? We interview Cristina Fossi, a marine toxicologist from the University of Siena, Italy, whose work highlights the extreme levels of pollution in Mediterranean cetaceans.

Our final program of the series, Whales of the Mediterranean Sea, explores whether whales, dolphins and porpoises can be the catalyst in protecting marine biodiversity in this ancient sea.

Whales, dolphins and porpoises face an increasing range of pressures in the Mediterranean Sea. Their survival depends upon a healthy sea, yet little of their marine habitat is formally protected.

Marine Protected Areas, also known as MPAs or Marine Sanctuaries, are the equivalent of national parks and protected areas on land. Their purpose is to protect and maintain marine biological diversity and associated cultural resources through effective management.

MPAs are tailored to the specific needs of an area of ocean. Some MPAs are no fishing zones; this allows stocks to rebuild, creating a spill over effect into surrounding areas. Other MPAs may manage specific activities to protect certain species, and the habitats they depend on.

Erich Hoyt is a marine conservationist and Senior Research Fellow for WDCS, the Whale and Dolphin Conservation Society. He is the author of numerous books, including ‘Marine Protected Areas for Whales Dolphins and Porpoises’. He is based near Edinburgh, Scotland. Erich feels that creating MPAs for cetaceans can reverse their decline, and play an important role in conserving other species, and whole ecosystems.

“Cetaceans are umbrella species in the sense that they bring in a lot of other species. Because their demands, their needs for habitat are considerably larger than most other species.”

Scientists across the Mediterranean basin are working to identify these areas of special significance for cetaceans. If they can be identified and protected in time, entire marine ecosystems and people will benefit.

“Today we are in the Alboran Sea off southern Spain where cetacean researchers are devising techniques to identify critical marine habitat. This is an area rich in biological diversity which is often in conflict with international and socio-economic interests.”

Ana Cañadas and Ric Sagarminaga run Alnitak - a marine research and education program in the Alboran Sea. The Alboran Sea is a dynamic, pelagic ecosystem where warm, salty Mediterranean water collides and mixes with cool, fresh water from the Atlantic Ocean.

“After a few years we started realizing we were in a very interesting area with a very high density and high diversity of several species, so we started focusing more on specific issues. Our main interest is to use science, sound science to inform conservation.”

Volunteers from the Earthwatch Institute join Ana and Ric onboard their research vessel Toftvaag. They act as field assistants, participating in all aspects of cetacean and turtle research.

“So one of the first things we were interested in a few years ago was to see if there are any special areas or hot spots that should be protected, like in Marine Protected Areas.”

Ana uses a research technique called spatial modeling to determine the presence and extent of important habitat for cetaceans, turtles and sea birds. Combining sightings data collected during boat-based surveys, with environmental factors such as temperature, depth, sea slope and productivity levels, allows her to create a picture of the abundance and density of animals in an area.

“The most interesting thing is to combine everything so you can get a more wide view of the ecology of the species. So for example, we have been focusing on the habitat preferences of different species – if there are any areas they prefer. The abundance and the trends, how are the populations doing - are they increasing, decreasing are they stable?”

“This is a loggerhead turtle, it’s the most common species we have in the Mediterranean. For now, we have just picked her up for measuring, and to take some photographs, we will record the position, the temperature of the water she is in and then we will just release her.”

Thousands of loggerheads are accidentally killed each year in Spanish waters, when caught on the hooks of longlines meant for tuna and swordfish.

“One of the main problems we have with fisheries in the Alboran Sea is it is probably a hotspot for bycatch of turtles worldwide. We have one of the highest bycatch rates in the longlining fishery. In some cases they can catch three or more turtles for every thousand hooks. Every year, that adds up to 20-30 thousand turtles, which is a very, very high number.”

In addition to tracking turtles, Ric collaborates on mitigation projects with local fishers, to establish ways to protect these ancient reptiles.

By working with local fishers, Ric has established that changing the bait on longline hooks from squid to mackerel can reduce turtle bycatch by as much as 80%.

“In the case of testing the bait, they were really enthusiastic about this whole process and being a part of it, which means one day if this becomes a regulation, which we hope it will, it will actually be accepted by the fishermen and that’s absolutely vital.”

Ana and Ric know that for know that for protection to work, all stakeholders, must recognize the value of healthy marine ecosystems.

“Working with the fishermen is essential in the same way it is essential to work with shipping companies, anyone who is out there. The idea would be that everyone feels they are part of this, they feel that these natural values are an added value to their activity, so that they see the benefit also in this being a protected area.”

Both cetaceans and sea turtles are migratory species, requiring corridors or networks of MPAs to protect them and the widespread habitats they depend on. So far, Ana and Ric have proposed a series of MPAs called ‘Special Areas of Conservation’ and ‘Special Areas of Mediterranean Importance’. Currently, only .01% of the world oceans are fully protected marine reserves, compared to 11.5% on land. Experts estimate that 20% of the world ocean is the minimum area needing full protection in order to maintain productive ecosystems.

“We’re really looking at the need to expand our conceptions, and it’s not just the surface, 71% of the ocean surface, it’s also looking 7 miles deep, 10 kilometers deep. We have a lot of different habitats and microhabitats, really 99% of the habitats on earth are probably marine.”

Currently there are only a handful of MPAs within the Mediterranean Sea that focus on cetaceans. Combined, they account for only 3.5% of the basin. In 2007, the countries that are parties of ACCOBAMS adopted a resolution supporting the creation of 17 MPAs for some of the world’s most threatened cetacean populations, and the habitats they depend on.

One of the challenges in establishing MPAs in the Mediterranean is that national waters only extend 12 nautical miles offshore, leaving a substantial area of potentially unregulated waters on the high seas. In most areas of the world, national waters extend 200 nautical miles offshore. There are encouraging signs of increasing collaboration to protect the high seas, with the establishment of the Pelagos Sanctuary for Marine Mammals in 1999. Monaco, France and Italy share 47% of this MPA, the remaining 53% is on the high seas.

“It’s a fantastic challenge for a group of countries to get together and try and figure out ways they can protect species and ecosystems within their remit. Cetaceans are using the high seas, we know beaked whales are found far from shore and sperm whales are right across open ocean areas, and if we can’t figure our how to do high seas protection, then we are leaving a lot of area open and it’s just going to be a free for all.

Unfortunately, MPAs are not the solution to all threats faced by marine species and ecosystems.

“Pollution is one of them because it is something that can happen well outside of a MPA and yet have profound effect on it because of the movement of the ocean currents. Also, it can be land based, most pollution, a lot of it comes from the land, through rivers and agricultural runoff from chemicals on land.”

“We are in Siena, Italy - home of the University of Siena, visiting one of the most important toxicology labs for marine life in Europe.”

Cristina Fossi is an Environmental toxicologist at the University of Siena. She focuses on the impacts of man made chemical pollutants on cetaceans and pelagic fish.

“The Mediterranean is probably one of the most fascinating places in terms of history, in terms of biodiversity, in terms of ecology. But it is a very fragile environment because the human impact is extremely more high here than in other places. So the most unexplored factor is the contamination.

“In order to have effective MPAs, we have to be able to manage the ecosystem. We have to look at where all these threats are coming from that might have an impact on the area.”

Ecosystem based management and the creation of MPAs to protect cetaceans could well be the key to ensuring a healthy and sustainable future for the Mediterranean, it’s biodiversity and those who rely on its cultural and commercial assets.

“MPAs are ongoing works of art so to speak, and I think you have got to have involvement from local people, local politicians, the researchers, the whole group of users that are involved in an MPA, they have to take it to heart, they have to take this area and it has to mean something to them. And then they transform it from a piece of paper, into something that’s real.”

The question remains, can cetaceans be the catalyst in protecting marine biodiversity in the ancient Mediterranean Sea? 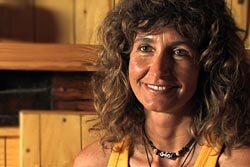 M.Cristina Fossi talks with Genevieve in her lab. Cristina is an environmental toxicologist from the University of Siena, Italy.
Photo - Chris Johnson