An earthOCEAN encounter with a loggerhead sea turtle in Kythira, Greece. http://link.brightcove.com/services/link/bcpid1243727361http://www.brightcove.com/channel.jsp?channel=717691041

Traveling a few miles offshore along the west coast of Greece in the Ionian Sea, the crew onboard the Research Vessel Nereis was keen to take a break. We were onboard searching for sperm whales along the Hellenic Trench. Our goal was to film encounters and document behaviors of these animals for our documentary film - "Whales of the Mediterranean Sea". The full script is available at Top-Papers.com.

We have been at sea for several days. After three close to perfect days, the weather was starting to deteriorate and we decided to seek shelter in a tiny fishing port on the island of Kythira. Kythira is situated at the foot of the Peloponnese, between the Ionian and Aegean Seas.

Upon arrival, we learned this port has a 'resident' sea turtle that visits fishermen who offer leftovers from last nights catch. This daily routine has continued longer than anyone can remember, and both man and turtle seem comfortable with the arrangement.

The water was as clear as a swimming pool, so we got in for a better look. The turtle was a loggerhead - Caretta caretta. He was a large, mature male, and not the least bit disturbed by our presence.

Sea turtles have survived on this planet for 150 million years. As he approached us, it was clear how perfectly designed he was for his aquatic environment. Evolved to perfection, the design of this ancient mariner needs no refinement.

Named for the huge head and powerful jaws that enable them to feed on hard-shelled prey, such as mollusks and crustaceans, loggerheads are the largest hard-shelled sea turtles alive today. His neck was thick and he displayed a long curved claw on each forelimb that he uses to grasp females when mating. He had a heart-shaped, reddish, brown carapace, which was covered with organisms such as barnacles and algae. In fact, over 100 species from 13 phyla may live on a single loggerhead, making it a mobile reef.

We watched this turtle glide effortlessly across the sandy, sea grass bottom, occasionally rising to the surface to take a breath. He paused to glance at us, but seemed neither interested, nor perturbed by our presence.

Loggerheads occur throughout the temperate and tropical regions of the Atlantic, Pacific, and Indian Oceans. Here in the Mediterranean, loggerhead nesting is confined almost exclusively to the eastern portion of the basin. The main nesting assemblages occur in Cyprus, Greece and Turkey, with smaller numbers recorded in Egypt, Israel, Italy, Libya, Tunisia and Syria. Based on the recorded number of nests per year in Cyprus, Greece, Israel, Tunisia, and Turkey, loggerhead nesting in the Mediterranean ranges from about 3,300 to 7,000 nests per season.

Loggerheads are highly migratory, making some of the longest journeys known of all marine turtle species. It is thought that an ability to detect wave direction and the Earth's magnetic field enables this species to navigate across open ocean. This prehistoric reptile may have crossed the Atlantic on several occasions. He may even have hatched decades ago from a nest thousands of miles away along the coast of the United States. Or he may have hatched and remained in the Mediterranean his entire life. Either way, he seemed rather content with his lot, having made this port his semi-permanent home.

Evolution didn't equip sea turtles with strategies to negate human pressures. Today, extinction is a serious possibility for most sea turtle populations, with comparatively few surviving the 25 - 60 years it takes to reach breeding age. All seven species are listed as endangered.

Drastically reduced in numbers throughout its range, the loggerhead faces numerous human induced pressures; the Mediterranean Sea is no exception.

Loggerheads face threats on their nesting beaches, and in their marine environment. Caretta caretta, like all sea turtle species, is in decline. The greatest cause world-wide is probably incidental capture in fishing gear such as long lines, gill nets, shrimp trawls, and direct exploitation of adult turtles and eggs for human food.

Here in the Mediterranean, an estimated 30,000 loggerheads are caught on the hooks of longlines every year in Spanish waters alone. The basin wide bycatch on longlines and in nets is much higher. It is unlikely all these turtles are killed; fishermen probably throw many back alive. However, with hooks in their bodies, or other injuries, the survival rate is unknown. 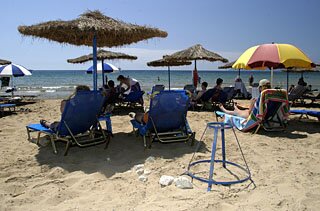 The other major cause of decline is beachfront development and the disturbance of nesting females and hatchlings on beaches. The most famous loggerhead nesting beach in the Mediterranean is Laganas Bay on the Island of Zakynthos. Zakynthos hosts about 1,200 to 1,300 nests on average, which is about 25% of all nests, and the largest known aggregation in the Mediterranean. The nests are spread over about 5.5 kilometers of sand, including Sekania beach, one of the densest loggerhead nesting areas in the world.

In 1999, a Presidential decree was signed to establish a National Marine Park in Laganas Bay. The first National Park in Greece, and the first Marine Park established in the Mediterranean to protect sea turtles. Nesting turtles prefer large tracts of flat uninhabited beach. Unfortunately, so do the tens of thousands of tourists who flock to Laganas Bay in Zakynthos every summer, peak nesting and hatching season for the loggerheads. Although this is a protected area, a lack of tourism control and enforcement of environmental regulations, means local owners are aggressively expanding their bars, cafes and restaurants out onto the very beaches required by the turtles to nest. Something we witnessed first hand while visiting Zakynthos in 2004, and again in 2007.

This old turtle is one of the fortunate ones. Against the odds, he has survived to maturity, and appears healthy. Lets hope he stays that way for many years to come.

What You Can Do to Help Sea Turtles?

Zoom into the location (marked in red) of where we encountered this loggerhead sea turlte in Greece. 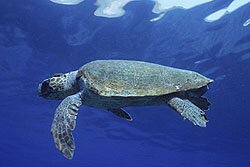 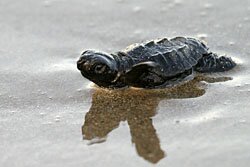