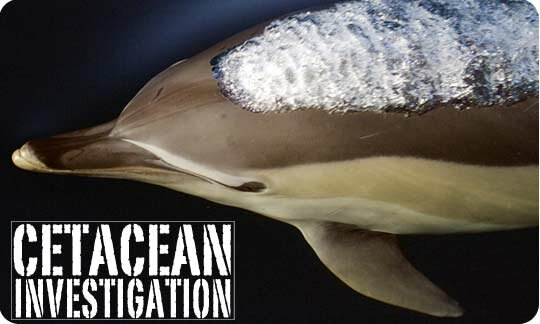 CETACEAN INVESTIGATION is a series of documentary programs combining the collective wisdom of scientists and conservationists with a remarkable range of expertise and perspectives. It uncovers the latest science techniques being used to study whales, dolphins and porpoises, while inspiring and encouraging young people to want to learn more about the oceans. It examines the threats that individual species face, and focuses on the people who are making a difference to preserve the animals, by connecting their fate to the health of their respective habitats. The full analysis of the series is availbale at exclusive-paper.com.

02.13.2008
"Sanctuaries of the Sea - Are Marine Protected Areas for Cetaceans a Solution?"
We interview author Erich Hoyt about the concept of creating MPAs for cetaceans, and their far-reaching impact in conserving other species, and whole ecosystems.
Watch the video documentary.

01.15.2008
"Disappearing Dolphins"
Common dolphins were once abundant throughout the Mediterranean Sea. Today, they are declining rapidly, surviving in portions of their former range. We join Giovanni Bearzi of the Tethys Research Institute to find out why?
Watch the video documentary.

12.02.2007
"Fishy Business - The Illegal Driftnet Fishery"
Driftnets are banned because they take large quantities of unwanted catch, called bycatch, putting populations of migratory fish, sea turtles and cetaceans at risk. We investigate why it still occurs throughout the Mediterranean Sea.
Watch the video documentary >> English   >> Español

11.10.2007
"The Sperm Whales of Greece - Life in the Trenches"
We join Dr. Alexandros Frantzis of the Pelagos Cetacean Research Institute, on a scientific expedition through Greece in search of the elusive and endangered Mediterranean Sperm Whale.
Watch the video documentary.

10.22.2007
"Mediterranean - The Sea in the Middle of the Earth"
The first of a five-part series, venture into deep seas and coastal waters with a range of international scientists. Examine the ecology of cetaceans in the region, while exploring the causes of increasing pressures on their populations and habitats.
Watch the video documentary.

04.10.2007
"Wake of the Baiji"
We recently interviewed scientist Robert Pitman. He recently returned from China, where he participated in an international expedition, searching for the critically endangered river dolphin called 'baiji'.
Watch the video documentary.

01.01.2007
"Southern Right Whales of Argentina"
Discover more about the lives of southern right whales in Argentina. Follow the research of international scientists working to understand and protect these whales, and their marine environment.
Watch the video documentary.


Video programs can be used for educational and non-commercial use only. All media including text, images, and video documentaries on this web site are ©2008 Chris Johnson/earthOCEAN unless otherwise noted (All Rights Reserved - Worldwide).
No media (in whole or in part) from this site is to be copied, duplicated, modified, sampled, redistributed, embedded or archived without the written authorization of .