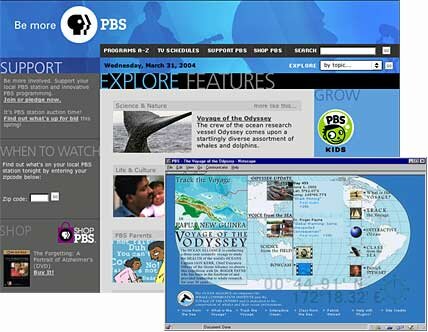 All about educational processes and available planning master thesis at https://dissertationmasters.com/.

The following are two examples of programs developed by Chris & Genevieve Johnson.

The Voyage of the Odyssey was a five-year global expedition designed to gather the first ever baseline data on levels of synthetic contaminants throughout the world's oceans. It is using sperm whales as indicator species for measuring the health of the seas. The findings will create a baseline understanding that will inform future scientific research and environmental policy planning. The R/V Odyssey is a ninety-three foot boat, which serves as the mobile research platform for non-profit, whale resarch group, the Ocean Alliance.

Dr. Roger Payne founder and President of the Ocean Alliance is best known for his discovery (with Scott McVay) that humpback whales sing songs, and for his theory that the sounds of fin and blue whales can be heard across oceans (a theory that has recently been confirmed by one of Payne's students working with blue whales). He has studied the behaviour of whales since 1967. He has led expeditions to all oceans and studied every species of large whale in the wild. He pioneered many of the benign research techniques now used today to study free-swimming whales, and has trained many of the current leaders in whale research, both in America and abroad. He directs long term research projects on the songs of humpback whales, and on the behaviour of 1300 individually known Argentine right whales - the longest such continuous study. Payne publishes technical articles and writes for general audiences. One of his three articles in National Geographic Magazine contained a record of whale sounds for which 10.5 million copies were printed - still the largest single print order in the history of the recording industry. His publications include the book, "Among Whales" (1995) and three recordings: "Songs of the Humpback Whale" (1970 - still the best selling natural history recording in history), "Deep Voices", (1975), and "Whales Alive" (1989 - compositions composed by whales but arranged and played by humans, in this case by musician Paul Winter). Payne has lectured at most major universities in the U.S. and England, and has appeared on most major TV and radio talk shows. He is a writer and presenter for television documentaries, and co-writer and co-director of the IMAX film "Whales".

The Voyage of the Odyssey website has been designed to be an interactive, educational adventure, allowing people all around the world to follow this amazing five-year journey via the internet. The award winning web series is a major part of the PBS (Public Television) website since June, 2000 and attracts up to 35,000 visitors each month and is frequently featured by America Online. While it is rich in material of interest to scientists, it is geared to a general audience and is especially intended to reach school children and their teachers. The Voyage of the Odyssey website incorporates many different educational features allowing people to learn about the purpose and procedures of the voyage.

Genevieve Johnson acts as the main education presenter writing and narrating Odyssey Logs from the vessel, broadcast about every other day. These logs discuss everything from whale behaviors and biology, the marine environment where the boat is positioned, dangers threatening these ecosystems, and the cultures of the areas the boat is visiting. The "Voice From the Sea" features the principal scientific investigator, Dr. Roger Payne, discussing issues important to whales and to all marine life. Produced, filmed and photographed by Chris Johnson, the site features extensive photos and videos from from the boat, underwater whale sounds and stories doucmenting many other aspects of life on the expedition allowing children and adults to join the crew.

Designed by Chris & Genevieve Johnson, the primary objectives of the educational and media program onboard the Voyage of the Odyssey are: 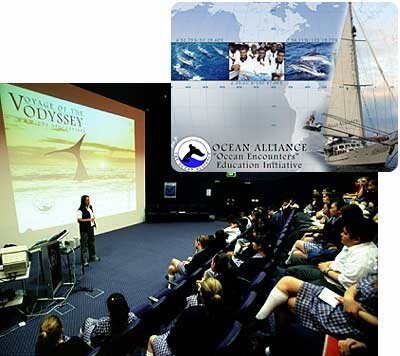 The Ocean Alliance is dedicated to the conservation of whales and their ocean environment through research and education. The Royal Melbourne Zoo is a leading international educational institution in Melbourne, Australia.

With the popularity of the PBS web series, the Voyage of the Odyssey - Chris & Genevieve Johnson developed the Ocean Encounters education initiative - a series of videos, images and sounds presented on DVD with educators from the Melbourne Zoo.

The aim is to have content generated from the Voyage of the Odyssey readily accessible to the presenter/educator in an array of formats on DVD.

This digital experience will uses broadcast video, images and stereo sound to allow visitors to the zoo to experience as close as possible, what is like to be on a global scientific expedition making discoveries (virtually) with along the way.

This is not a linear program, rather a multidimensional way to access information/content from the Voyage of the Odyssey which is entertaining for the general user, yet informative enough for an educator to utilize. Content can be directed or modified to fit a variety of structures, subject areas and age groups, while still addressing specific curriculum outcomes.

There is also a 'live' element to the Ocean Encounters program. A component of the presentation allows students and interested members of the public to interact directly to R/V Odyssey crew and scientists for 15-20 minutes per session.

In a presentation format, the teacher/presenter would use the interactive program to help explain or visualize a certain concept. For instance, if the Melbourne Zoo has a day on the "human impacts" on the ocean environment, the presenter/educator could pull up the following content from a set of DVDs.

The content of the Voyage of the Odyssey is quite unique in that it contains very in-depth material not just on whales but also other issues related to all aspects of the marine environment.

During each presentation, which could last up to an hour, the teacher/presenter links to the Odyssey for a 15-20 minute question and answer session if desired via videophone.

By delivering the interactive content on a DVD, this allows the educator/presenter to use a remote control to access desired content (video, images and sounds) in a simple, convenient way while it is displayed with an LCD projector. Furthermore, it involves using one system of playback, eliminating the potential of difficulties that may be encountered with additional computer technology.

In addition, the Ocean Encounters Initiative, is a working prelude to distbute educational video and audio reports from the Voyage of the Odyssey to educators in local communities as well on a number of topics ranging from whale and dolphin biology and conservation, to ocean policy issues, natural history and information on ecology of marine creatures.

The set of DVDs are produced, filmed and photographed by Chris Johnson with educational content and curriculum produced by Genevieve Johnson. The overall aim of the Ocean Encounters program is to: