River dolphins are a disparate group of four species of cetacean. You will notice from the Latin names in italics that each of these dolphins belong to different genera, in fact they each belong to separate families, - there is a lot of mammalian evolution represented among this group.

River dolphins have very long beaks, are slow swimmers so they have rather floppy appendages, usually have a reduced dorsal fin, nondescript color patterning, and a vestigial eye with reduced ability to see. All of these features are considered adaptations to living in a riverine environment where the water is typically shallow and very turbid.

Until recently there were 4 species of river dolphins that lived in 3 major river systems. In December 2006, the Yangtze River Dolphin, called the baiji (pronounced 'bye gee') was declared functionally extinct, the first cetacean species to go extinct in modern times as a result of human activity.

EXTINCTION OF A RIVER DOLPHIN

Although baiji had been known to be the most critically endangered cetacean species in the world for the last 2-3 decades, it wasn't until last year that a full scale, range wide survey was organized to try to estimate the number of remaining baiji. The survey was meant to be a prelude to capturing several baiji and starting a captive breeding program.

In Chinese folklore, the baiji was dubbed 'Goddess of the Yangtze', a beneficent animal once revered by the fishing people of the river. The species was declared a National Treasure of China and has been a protected species since 1975.

The baiji was a very shy and graceful freshwater dolphin, with a rather stocky body, roughly the size of an adult human. It was bluish-grey in color becoming whitish on the underside. Like all river dolphins, it had a very long, narrow beak with a slightly upturned tip, and small eyes placed high up on the face. The dorsal fin was positioned low on the body and was triangular in shape and the flippers were wide and rounded. Females were larger than males; they grew over 7.5' long and could weigh over 500lbs. The baiji's Latin name Lipotes, derives from the Greek for 'left behind'.

There are no historical estimates of baiji abundance. By the 1970's, when the first surveys occurred, the population had already started declining, and that decline continued through the 1980s and 1990s. The list of factors that contributed to the decline included a tremendous increase in shipping traffic, but the main threat, as is the case for all small cetaceans in coastal areas was undoubtedly incidental mortality due to fishing gear.

We know very little about the biology of baiji. Because the baiji was so rare and extremely shy, observation of them in the wild was difficult. In fact, you can read all that was ever been written about it in a couple of hours. It traveled in small groups of four to five animals, fed on fish, preferred the deeper, slower water in the river and foraged among eddies downstream of islands and tributaries. A recent study found that they often swam with finless porpoises (Neophocaena phocaenoides), the only other cetacean in the Yangtze River, which is also threatened (classified as Endangered on the IUCN Red List). They were most active through the night from early evening to early morning. When surfacing to breath, baiji broke the surface of the water without creating a splash.

Historically, baiji was confined entirely to the Yangtze River drainage, from Yichang just below the Three Gorges Dam, down river to the Shanghai estuary near the Pacific Ocean - a distance of about 800 miles. Above Three Gorges and the Dam, the current was apparently too swift for baiji.

The Cause of Extinction

Humans have inhabited the Yangtze River for thousands of years. Over the millennia, their habitat was greatly modified for agriculture and flood control.

In recent decades, the Yangtze River has become one of the world's busiest waterways and is subject to a great range of human pressures that had a devastating effect on the baiji. Currently 10% of the world's population inhabits the Yangtze River Valley- this means the tremendous amount of economic activity along the river including shipping traffic, construction, pollution, and illegal fishing is truly astonishing.

In the midst of all this industrial activity the artisanal fishing goes on as it has for hundreds of years, with dolphins being caught in nets and on 'rolling hooks.' This is probably what ultimately caused the demise of the baiji - fishermen feeding their families.

OTHER SPECIES OF RIVER DOLPHINS 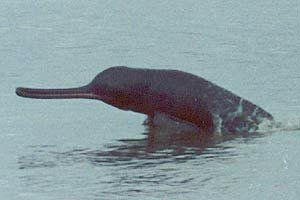 The Ganges and Indus River Dolphins

The plump bodies of the Ganges and Indus River Dolphins are uniformly gray. The head is small and bisected by a longitudinal ridge, while the eyes are no more than the size of pinholes. The beak is strikingly long and narrow, and thickens at the tip, while in young animals the teeth can be seen overlapping the jaw like fangs when the mouth is closed. They feed predominantly on shrimp and fish.

Very little is known of their social structure, although they appear to be solitary or in small, loose groups. They appear almost constantly active and can dive for several minutes.

Although occupying a fairly extensive range, their numbers have declined dramatically in many areas.

This freshwater cetacean is the most abundant of the world's river dolphins and is found throughout the Amazon and Orinoco River basins of South America. Three geographic subspecies occur throughout the range, which is only limited by impassable rapids or waterfalls. Amazon River Dolphins can easily maneuver along the floor of the flooded rainforest, as well as rivers and lakes. Their small head and long beak make digging and probing for prey ideal, and their neck is exceptionally flexible. They are versatile forages, known to consume at least 50 species of fish.

This dolphin is often called the Pink Dolphin, and is referred to as Boto in Brazil. The coloration of individuals varies from solid gray to bright pink as they age. Usually solitary, they are rarely found in groups of three or four when foraging, and are known to be curious of boats.

Amazon River dolphins are presently not endangered and continue to occupy most of their historic range. Current estimates put their numbers in the tens of thousands, however, many of the traditional beliefs that kept people from killing them are disappearing and fisherman are increasingly viewing them as competitors. 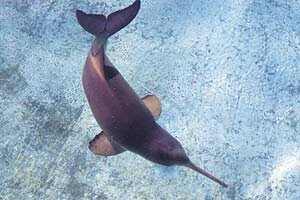 The Franciscana is a river dolphin in name only; in fact it lives exclusively in estuarine and coastal marine waters of South America, in the waters of Brazil, Uruguay and Argentina. Franciscana's are difficult to observe, and consequently, little is known about them. Differences in genetic characteristics suggest there are at least two distinct populations.

Franciscanas usually remain within 30 nautical miles of shore in waters less than 100 feet deep. They usually occur in groups ranging from a few to about 15 individuals. They are not known to be active and are difficult to detect at sea.

The Franciscana is one of the smallest cetaceans at less than 6 feet in length. It has a plump body of non-descript gray coloration. It has a bulging melon and a long, slender beak that increases in length with age. Its diet varies by area and season.

Near shore fisheries of Eastern South America result in incidental entanglements of Franciscanas in gill nets. These small-scale fisheries are difficult to monitor, and the real rate of bycatch is unknown. Loose estimates put the population at about 40,000 animals.

An often overlooked threat is the small size of most populations, which in itself can cause serious problems; small populations often suffer low genetic fitness and problems caused by inbreeding, and are often less able to adapt to environmental changes.

All the freshwater dolphins shown above are CITES Appendix 1 listed apart from the Boto, which is, listed Appendix 2. The Asian river dolphins have already suffered one extinction, while other freshwater and coastal dolphins and porpoises are experiencing dramatic declines in their range, and rank as some of the most endangered of all mammals.

The extinction of the Baiji can serve as a warning for other similarly endangered populations and species.

WHAT CAN YOU DO? 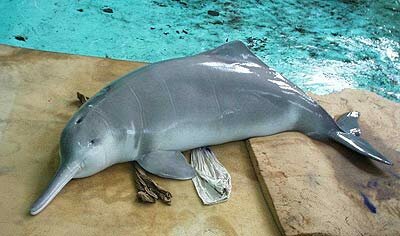 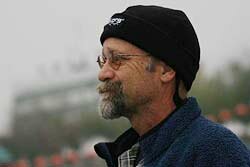 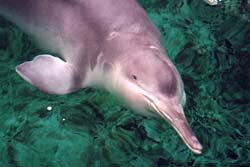