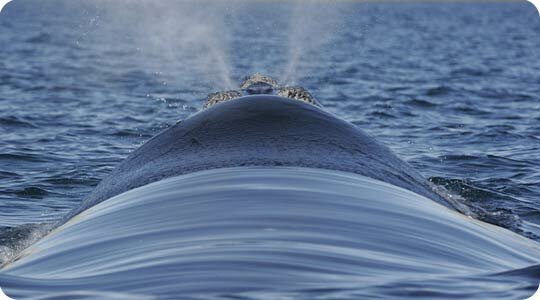 Right whales are one of 14 species of large whale. They belong to the sub-Order of baleen whales or Mysticetes that also includes, species such as the blue whale and the gray whale. Three right whale species are recognized in the genus Eubalaena, while the Bowhead Whale, its closet relative, is placed in its own genus, Balaena.

Right whales are large, bulky, baleen whales and are among the largest, and slowest swimming of all great whales. The right whales body is almost entirely black with irregular white patches on the abdomen. Unlike most other cetaceans, right whales have a broad, flat back that lacks a dorsal fin.

Physically mature females are larger than males; this is true of all baleen whale species. Adult right whales are an average 35-55feet (10.7-16.8 meters) long. Although the largest known individual measured over 60 feet (18 meters) in length and weighed 117 tons (9,106,500kg).

They may live at least as long as humans, and probably longer. For several months of the year, right whales frequent the coast, and as a result are a favorite species among whale watchers.

Like all cetaceans, right whales have undergone extensive adaptations since diverting from small, furry, ancestral land mammals around fifty million years ago.

A think layer of fat, called blubber replaced fur, in right whales, this may be as much as half a meter thick in some places such as the 'neck roll'. Like all baleen whales, right whales have two blowholes that shifted from the tip of the snout to the top of the head to make breathing easier at the sea surface. The jaws of right whales grew forward and became highly curved. This allows some 250 baleen plates to hang down from either side of the top jaw or rostrum like a giant curtain. Baleen is made of keratin, the same material as human fingernails. The plates are up to two meters in length and continue to grow and fray into fine, stiff hairs at the ends throughout the whale's life. The right whale uses these baleen plates to feed. By swimming slowly at the surface with an open mouth, the right whale swims through dense clouds of krill and copepods, water flows through the mouth and baleen, while prey items are trapped on the inside near the tongue and swallowed. While on their feeding grounds, right whales may consume up to two tons of these tiny crustaceans every day. 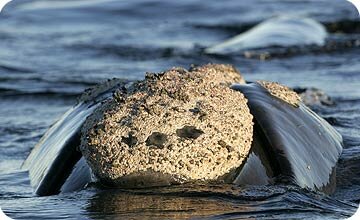 To accommodate their enormous mouth, the head of the right whale has evolved to enormous proportions. It is huge and rounded and accounts for up to one third of their entire body length. Their forelimbs developed into large, paddle shaped flippers, which help the whale stabilize and steer while swimming. Interestingly, they still retain identifiable wrist and finger bones revealing a sea mammal that once lives on land. Hind limbs disappeared, and like all whales, right whales have a large, powerful, boneless tail, supporting strong, stiff flukes that are flattened horizontally and move up and down as the whale swims forward.

On the heads of right whales are irregular patches of thickened skin called callosities - a feature that is unique to this species. Callosities are found in the same places on the whales that humans have facial hair - above their eyes, above their top lip, and along their lower jaw. The shape and placement of these callosities is different on every individual whale. Although callositie tissue is dark gray, they are covered by thousands of whale lice called cyamids. This gives callosities a white appearance and allows researchers taking aerial photographs from planes or cliffs to identify individual whales and keep track of family histories throughout generations.

Right whales are the most endangered of all the great whales and are found in small numbers worldwide. Scientists now agree there are three species of right whales, one in the north Pacific, one in the north Atlantic, and the other in the southern hemisphere that includes the southern parts of the Pacific, Atlantic and Indian Oceans. It was unknown until recently when right whales split from one species to three. The tiny white cyamids proved to be the answer to this question. These crustaceans live their entire lives on right whales. They have far larger populations, and therefore much higher levels of genetic variation. By looking at the genes of the whale lice, scientists were able to determine that right whale species split from one to three about five million years ago, and have rarely if ever crossed the equator since then.

Right whale populations in all three ocean systems appear to have been continuously large for several million years before human exploitation drove them all nearly to extinction. The demise of right whale populations began in the 12th Century when the Basque whalers discovered these slow moving leviathans were easy to approach, floated when dead, and yielded large quantities of oil. They were given the name 'right' whale, because they were the right whales to kill. It is a sad reminder of the past when tens of thousands of these animals were hunted.

In 1931, right whales were granted worldwide protection form whaling, yet despite decades of protected status, some populations in the Northern Hemisphere are not recovering. The north Atlantic population Eubalaena glacialis contains only 350 animals, while the north Pacific population Eubalaena japonica in thought to be even smaller. Fortunately right whales in the southern hemisphere Eubalaena australis are growing at an annual rate of 7%, however numbers still remain below 20% of their original size. Where approximately 70,000 right whales once live in the southern hemisphere, only 12,000 are present today. The Southern Hemisphere supports three genetically distinct breeding populations, one in South America, one in South Africa, and a third in Australia and New Zealand.

Despite it's immense proportions, the right whale is highly acrobatic, and is often observed 'sailing' and 'tail' or 'pec' slapping against the sea surface. What is more remarkable is that right whales regularly breach, propelling their massive bodies almost clear of the water with only two or three strokes of their powerful flukes. Whales nearly always twist when breaching so as not to land heavily on their bellies.

Right whales are promiscuous: adults form mating groups where several males compete for access to a single female. Male right whales have the largest testicles of any animal on the planet weighing in at one metric ton. The reason for this is that large testicles hold large amounts of semen. The excess semen is used to wash out the semen of a previous suitor, thus ensuring the last male to copulate with the female will pass on his genes. Females are picky and will turn belly up to avoid unwanted copulations.

Females reproduce once every three years. After one year of pregnancy they give birth, lactation lasts for another year, and a third year is spent recovering fat reserves ready for the next pregnancy. Females generally have their first calves at 9 years of age, but have been known to give to give birth as young as 7 years old. 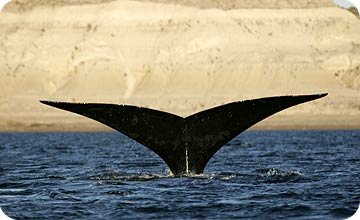 After giving birth in their lower latitude breeding grounds, mother and calf pairs spend most of their time alone. During the first few weeks of life mothers keep their babies very close to shore and out of reach of predators. The calf spends a lot of time swimming in order to develop its motor skills in preparation for its first migration.

The Right whale is an inquisitive and playful whale and has been observed poking, bumping or pushing objects around that are in the water, including boats.

Right whales are generally found in temperate and polar waters. Each year in their respective hemispheres, right whales migrate long distances between high latitude feeding grounds in summer, and low latitude calving grounds in winter. It is often assumed the exclusive function of the right whales considerable fat layer is to keep the animal warm in cold water, however, its main purpose is to store energy. Fat reserves are like fuel tanks, they act as energy stores during the long periods right whales fast each year in their calving grounds and during migration.

Although an inshore 'urban' species for half of the year, many questions remain unanswered about right whale migration patterns. Right whales generally give birth in coastal waters and move far out to see during their feeding season. However, feeding grounds and migration routes of most populations are only partially known. Many females do not return to coastal breeding areas every year, but visit only in calving years. Where they go in other years remains a mystery. Specific feeding grounds are poorly known and currently based primarily on old whaling data. Scientists are collecting tissue and baleen samples for genetic and stable isotope analysis, which provides information about diet and feeding locations.

In their day-to-day lives, right whales face few natural threats. Occasionally killer whales may attack calves, but for the most part, sheer size ensures the life of a right whale is relatively care free.

Human impacts are taking an increasing toll on all populations of right whales and their habitats. The north Atlantic right whale is severely impacted by ship strikes and entanglements in fishing gear. Increasing noise and chemical pollution is having a cumulative but largely unknown impact, while the south American population faces a unique and increasing threat from a native species - kelp gulls.

As a result of rich food sources available to them in garbage dumps and the effluent of fish processing plants, the kelp gull population is rapidly increasing. The gulls have learned to feed on the skin and blubber of the whales creating gaping open wounds. This is very painful and affects the normal behavior of the whales in their nursing grounds. As vulnerable calves are the main target, scientists in the region are concerned these gull attacks may reduce calf survivorship. 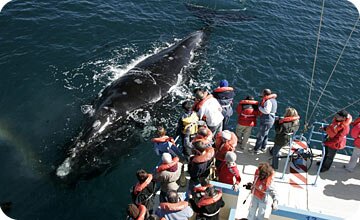 What can you do? - Whale watching

The most effective way to help whales is to enjoy a whale watch trip. Choose a whale watch with an educator or naturalist onboard, and do a little research to ensure it is a well-regulated operator. As well as offering the opportunity to see whales close up in their natural environment, whale watching provides the opportunity to learn more about whales around the world, and specifically about the issues surrounding the population you are watching.

Whale watching is rapidly making coastal communities around the globe a magnet for a growing number of "eco-tourists", who are willing to pay to watch whales in their natural habitat. Whale watching is one of the fastest nature-based tourism activities in the world today. For example, Peninsula Valdes in Patagonia, Argentina supports one of the oldest and largest whale watching industries in the southern hemisphere. Between 1991 and 2004, the number of tourist watching whales in the region increased 450%. In addition to learning more about whales, supporting the whale watch industry contributes directly to sustainable coastal development. The more a region focuses on gaining economic benefits from whales without affecting their populations, the better we are all positioned to learn about the complex interactions between these animals and their ecosystems. This is especially relevant in coastal regions, where so many peoples depend on the ocean that we share. Increased support for whale watching, in turn supports the creation of whale sanctuaries and marine protected areas. This is the best signal to the rest of the world that a region stands for conserving whales and is against hunting them, and in turn, this publicity helps draw more tourists to the whale-watching industries of many countries. A region's commitment to the goal of long-term conservation of marine biodiversity, through the recovery of whale populations is evident by its support of a whale watching industry. 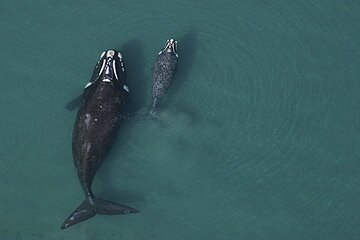 Photographs of a mother, calf pair of southern right whales from an aerial survey. Each year, reseachers take photographs from a plane to identify whales from the air.
Photo - Chris Johnson 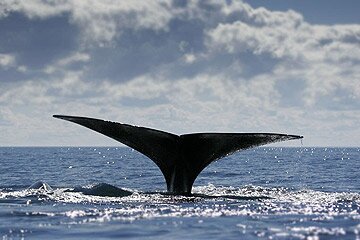 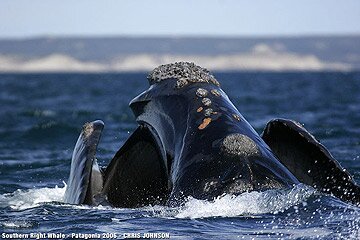